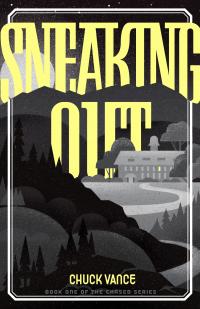 Could you sleep next to a murderer?

What if your best friend and roommate killed a teacher at your prep school? Or what if he didn’t do it but he’s being framed, and you’re the only person who can save him?

What if you aren’t sure which it is?

Luke Chase—yes, that Luke Chase, a modern hero ripped from the headlines—didn’t mean to get caught up in Mrs. Heckler’s murder. He just wanted to hook up with the hot new British girl at St. Benedict’s, and if that meant sneaking out to the woods after hours, then so be it. But little did he know someone would end up dead right next to their rendez-vous spot, and his best friend Oscar Weymouth would go down for it. With suspects aplenty and a past that’s anything but innocent, Luke Chase reluctantly calls on his famous survival skills to find the true killer.

Join Luke and his St. B’s squad as they break school rules and defy logic and common sense to bring a serial killer to justice, right there on their prestigious Connecticut campus.

For fans of A Study in Charlotte, A Separate Peace, and all boarding school lit, Sneaking Out immerses readers in a sequestered hothouse of privilege and access.